Pneumonia of unknown cause began spreading in Wuhan, China, in late 2019, which led to the discovery of the severe acute respiratory syndrome coronavirus-2 (SARS CoV-2) as the underlying cause.1 SARS CoV-2 virus causes the disease named COVID-19, which has drastically impacted the world in an unprecedented manner. Much research has been conducted to analyse the spread of the virus and to identify potential risk factors associated with transmission and adverse outcomes.

Since the start of the COVID-19 crisis, it became evident that three factors were associated with worse health outcomes; these include age, co-morbidities and male gender.2 However concerns were raised over a possible association between ethnic groups and worse outcomes in COVID-19.3 Consequently, Public Health England published a report on the disparities in risk and outcomes of COVID-19, including ethnicity.4 In this editorial, we aim to discuss the apparent disproportionate impact that COVID-19 has on black and ethnic minorities and the possible underlying factors.

Impact of ethnicity on outcomes in COVID-19

Initial concerns were raised of a possible association between COVID-19 and ethnicity after the first ten United Kingdom (UK) doctors who died from COVID-19 were noted to be from an ethnic minority background.5 The disproportionate deaths due to COVID-19 in ethnic minorities was unexpected given that the population of ethnic minority in the UK is around 14% and ethnic minority doctors make up a third of the doctors in the NHS.2

The Intensive Care National Audit and Research Centre (ICNARC) provided further data on critically ill confirmed COVID-19 patients admitted to critical care units in England, Wales and Northern Ireland.  The data, published on 22nd May 2020, showed that of 9026 patients with confirmed COVID-19, 33% were from ethnic minority (see Figure 1),8 which is more than double the ethnic minority percentage population in UK.The data from the ICNARC report demonstrates that Black, Asian and other ethnic minorities represent a greater share of critical care admissions compared to their respective population share (see Figure 1). These results appear to be specific for COVID-19. In the report a comparison was made between COVID-19 cases and historical data of viral pneumonia (non-COVID-19) admissions to critical care between 2017-2019. Interestingly a significantly lower proportion of patients with viral pneumonia admitted to critical care were from an ethnic minority (11.6%).8 Unfortunately, the ICNARC did not report mortality outcomes according to ethnicity. 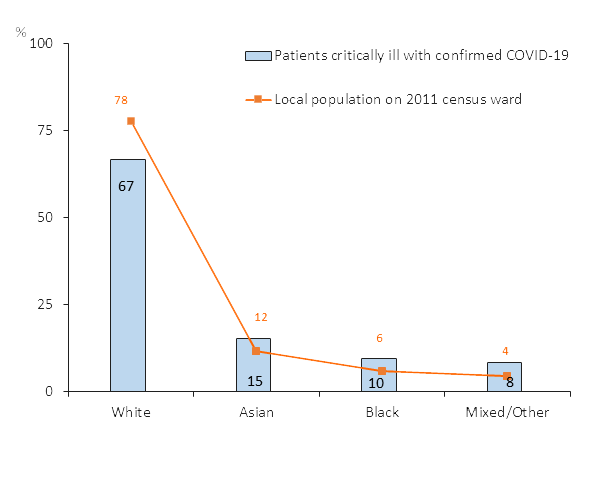 Why do ethnic minorities in the UK have increased risk in COVID-19?

Ethnicity is a complex make up of genetics, social concepts, cultural uniqueness and behaviour patterns. Different ethnic groups vary in their co-morbidities, immunity profiles, genetic predisposition to infection, cultural and lifestyle factors.5,9 The differences in the unequal effects of COVID-19 amongst ethnic minorities is likely a result of economic, social, health and occupational factors.3

One important explanation for the increased risk of COVID-19 amongst ethnic minorities may be the presence of comorbidities. Observational data suggests that those with greater risk of severe COVID-19 infections were above the age of 60 years and had a number of comorbidities including hypertension, diabetes, cardiovascular disease, chronic respiratory disease and cancer.10 Data from the INARC suggests that advanced age does not appear to account for the ethnic variations in outcome, given that the median age of patients admitted to critical care with COVID-19 was lower in ethnic minorities (55.5 years) compared to those from a White background (60.4 years). However, the apparently increased risk in individuals from an ethnic minority background may be confounded by other factors including comorbidities. Ethnic minorities are more susceptible to acute respiratory tract infections, Vitamin D deficiency, enhanced inflammatory response and increased cardiovascular risk factors such as diabetes, obesity and renal disease. Specific ethnics groups such as South Asians have higher rates of diabetes, hypertension and cardiovascular disease which have been associated with severe disease and increased mortality in COVID-19.9 Black communities are also disproportionately affected by diabetes, stroke, heart disease, kidney disease, respiratory illness, Human Immunodeficiency Virus and limited health care access worldwide.1

Unfortunately, the Public Health report did not take into account patient comorbidities.4 In a retrospective, observational study in America 77 % of patients hospitalised with COVID-19 were from Black ethnic background; although the Black population comprises of 31 % of the total population.11 Interestingly black race was not associated with increased in-hospital mortality when other factors were controlled for. A recent large prospective observational study of 1150 patients hospitalised in New York due to COVID-19 identified a several independent risk factors associated with in hospital mortality in COVID-19. 12 These included older age, chronic cardiac disease, chronic pulmonary disease and higher serum concentrations of d-dimer and interleukin-6. Although a disproportionately higher number of patients hospitalised were from an ethnic minority background (62% Hispanic or Latino, 19% Black or African American, 12% White, 3% Asian), in their analysis ethnicity was not associated with an increased mortality risk (41% Black or African American, 38% Hispanic or Latino, 47% White).12

Socio-economic disadvantage is often seen in ethnic minorities due to poor housing, overcrowding and intergenerational cohabitation which in turn increases spreading of the virus due to challenges of social distancing.5 Occupation could partially explain the disproportion of death seen in ethnic groups.3  Health workers are more likely to be exposed to COVID-19 patients and may potentially have a higher risk of infection. More than 20% of black African women are working in health and social care. Indian men are 1.5 times more likely to work in the health sector compared to white British population. Only 3% of the working age population of England and wales are from Indian ethnic origin, yet they account for 14% of doctors.3  This means that a higher proportion of people from ethnic minorities are likely to work in the health and social care sector and thus more likely to be exposed to COVID-19. In a recent report from Public Health England they reported that Health Care workers did not have increased mortality rates due to COVID-19, compared to the general population.7 In fact, data from the Office of National Statistics demonstrated that carers (relative risk (RR) 1.8, 95 % confidence interval (CI) 1.6-2.1), security workers (RR 2.6, 95 % CI 2.0-3.4) and taxi drivers (2.5, 95 % CI 1.9-3.2).7

Early data from the USA suggested an alarmingly high mortality risk in COVID-19 amongst Black communities.13 Data from the John Hopkins University and American Community Survey demonstrated an excess risk of COVID-19 infection and deaths amongst counties comprised of a Black majority (137.5 cases/100,000, 6.3 deaths/100,000) compared to White (39.8 cases/100,000, 1.1 deaths/100,000), Hispanic (27.2 cases/100,000, 0.6 deaths/100,000) or Asian (19.5 cases/100,000, 0.4 deaths/100,000) majority counties. This data should be interpreted with caution as this did not include patient level data and ethnicity is often under-reported.14,15 Furthermore, socio-economic factors may also explain the disparity in COVID-19 cases and outcomes. For example, in the USA ethnic groups may be more susceptible to COVID-19 due to increased comorbidity, higher poverty rates, low levels of education, limited healthcare access, lack of universal healthcare and higher rates of industrial jobs which requires work away from home.1

Some studies have reported that ACE2 expression is more abundant in Asians while other studies demonstrated no difference in ACE2 expression in different ethnic groups.16,17 ACE2 polymorphism is correlated with diabetes, hypertension, stroke, septal wall thickness, ventricular hypertrophy and coronary artery disease in Asian population.10 However, whether ACE2 polymorphism has a direct association with COVID-19 or its severity remains speculative.10 Research is still ongoing to identify ACE2 polymorphism between different ethnic groups to see if any correlation can be drawn upon which may explain more severe COVID-19 infections.16

The COVID-19 pandemic has had an unprecedented impact worldwide and in the UK. Observational data to date supports an association between ethnic minority background and worse outcomes in COVID-19; increased risk of hospitalisation and critical care admission. The limited evidence available does not suggest an increased mortality risk due to COVID-19 in patients from an ethnic minority background. The association with ethnicity and worse outcomes appears independent of age but may well be confounded by other cardiovascular risk factors (e.g. hypertension, cardiac disease). Unfortunately, studies to date have failed to disentangle ethnicity and cardiovascular risk factors. More robust research is needed to confirm the association and to identify causative factors that may be addressed. As the cases in the UK have risen and there are concerns about a second wave, it is important to identify those at an increased risk of severe illness in order to prevent disease transmission, ensure adequate healthcare provision, plan criteria for return to work and risk assessment, provide economic support and address health inequity.18 Further work is also required to increase awareness in order to reduce the overall morbidity and mortality associated with COVID-19.