As the novel coronavirus SARS-CoV-2, known widely as COVID-19, continues to spread globally, the search for pharmaceutical treatments has intensified. Given the speed at which the pandemic is progressing, much focus has fallen on repurposing drugs with known antiviral effects. Therefore, attention has fallen on hydroxychloroquine and azithromycin as potential drug therapies for COVID-19. Due to the pace at which the situation is changing, there has been a deluge of evidence of varying quality publicised in academic, mainstream and social media streams. This editorial will thus look at the rationale for using these drugs in the treatment of COVID-19, the evidence that has accumulated so far, and the cardiovascular safety profile of using these drugs with recommendations on how to mitigate their risks.

Chloroquine and Hydroxychloroquine (HCQ) have been used for many years as antimalarials. More recently, their immunomodulatory properties have been used specifically for treatment of auto-immune disorders such as Systemic Lupus Erythematosis (SLE). Furthermore, chloroquine has been shown to have significant in-vitro effects on viral replication in a variety of viruses including HIV, Influenza A, and most pertinently the 2003 SARS Coronavirus where it showed a 99% reduction in viral replication1-3. Building on these studies, Liu et al. (2020) recently showed that the less toxic hydroxychloroquine was also effective in vitro against COVID-194. Therefore, in both China and France, regulatory bodies have allowed the use of hydroxychloroquine.

Similarly, azithromycin has long been studied for its use as an anti-inflammatory and anti-viral in addition to its roles as an antibacterial. It is the only antibiotic known to significantly reduce exacerbations of COPD5, around half of which are caused by viral, rather than bacterial infections. Mechanistically, it seems likely that it exerts its effect via upregulation of interferons and interferon-stimulated genes6.

Against this background, there has been a move to trialling hydroxychloroquine in patients with COVID-19. Although there are at least 10 clinical trials planned in China, there is only one small randomised trial of 30 patients answering this question at present published after peer review and a further study from Wuhan province of 62 patients that has been published “preprint” and is yet to be peer-reviewed. Furthermore, there is an 80-patient observational study and a 36-patient non-randomised trial from the same group in France.

The second, yet-to-be peer reviewed paper from Wuhan did show some benefit of hydroxychloroquine on COVID-19 pneumonia progression using CT progression as an endpoint8. This trial randomised 31 patients to each arm (control vs treatment) with both arms including standard of care including antivirals and antibiotics with occasional steroid use. The treatment regime added hydroxychloroquine 200mg BD. The patients in the treatment group appeared to be slightly more unwell on average with higher rates of cough and fever. Despite this, 81% of the patients in the hydroxychroloquine group had improved radiological features of pneumonia on CT compared to 55% of the control group. All 4 patients that progressed to severe disease were in the control group. These results are promising but it must be noted that this paper has not yet been peer-reviewed.

The data from France is interesting but cannot be viewed as practice-changing. The non-randomised trial followed 42 COVID-19 positive patients in Marseilles9. All patients were offered hydroxychloroquine – those that turned it down or had exclusion criteria were therefore used as controls. This left 26 patients in the hydroxychloroquine group and 16 controls, although 6 patients in the treatment group were lost to follow-up. Furthermore, of the 20 patients analysed in the control group, six had azithromycin 500mg stat and 250mg OD thereafter. The endpoint used for analysis was negative viral PCR in nasal swabs at day 6. On this primary endpoint, there was a reduction in positive viral PCR swabs at day six: 70% of the treatment group were negative compared to 12.5% of the control group.

There are at least four major problems with this data for recommending use of Azithromycin and hydroxychloroquine clinically:

Based on the results of this trial, the same group released an observational study of 80 patients in the same institution treated with hydroxychloroquine and azithromycin10. Again, the endpoint was PCR-negativity in throat swabs at various time-points. Although the results appeared favourable compared to other published data from an unwell patient population in China (case fatality rate 1.2% in this study vs 28% in the comparator study), the differences in the patient populations are too great to make any statements. However, the combination of azithromycin and hydroxychloroquine was tolerated well, had a good safety profile in these 80 patients, and certainly warrants further study in the form of a randomised controlled trial.

Azithromycin is also associated with lengthening of the QT interval. Guinea-pig models suggest this could be due to inhibition of L-type calcium and sodium channels13. The effect seems to be relatively modest and most pronounced in patients with other risk factors for lengthening of the QT, and is largely based upon observational data14. Furthermore, of those patients with long QT syndrome secondary to azithromycin, only 1% of these will develop ventricular arrhythmias15. Looking at patients with baseline normal QTc intervals from a randomised trial for azithromycin vs amoxicillin in preventing COPD exacerbations, only 1 out of 1142 patients randomised to Azithromycin 250mg BD developed QTc prolongation5, compared to 2 patients in the amoxicillin group. Therefore, the risk of QTc prolongation with azithromycin is present, but very modest in low-risk populations.

An important benefit of azithromycin compared to other macrolides must be noted; although macrolides in general inhibit cytochrome p450, azithromycin is the standalone compound in this class with a 15-member, rather than 14-member lactone ring. The result of this is a reduction in inhibition of cytochrome enzymes, which reduces the direct interactions with other drugs16.

Finally, the combination of hydroxychloroquine and azithromycin has not been properly assessed from a safety perspective, although it seems plausible that there is an additive effect on QTc prolongation. Old animal data has shown no increase in action potential alternans of azithromycin in addition to chloroquine compared to chloroquine alone17. The small datasets from the Marseilles hydroxychloroquine and azithromycin trials have shown no adverse effects, but high-risk patients were excluded from receiving this combination of treatments and only 80 patients were enrolled9.

As a result of this and other data, Giudicessi et al’s11 excellent paper proposes a “traffic light” system for assessing the risk of QT prolongation in patients being treated with hydroxychloroquine and azithromycin. The patients are divided into three categories: green, orange or red.

Using baseline data from the Mayo institute’s 1400 patients with congenital long QTc, they propose a cut-off of 470ms for men and 480ms for women. All patients should receive an ECG at baseline and then again at 48 and 96 hours.

“Green” patients: All men with a QTc below 470ms and women <480ms should be considered low risk and can receive azithromycin and hydroxychloroquine provided that the QTc does not lengthen by either >60ms compared to baseline or to >500 ms.

“Orange” patients have a QTc between 470/480ms and 500ms. This should prompt a pause for thought and a correction of underlying electrolyte disturbances / discontinuation of other QTc-prolonging therapies, but should not limit drug administration.

“Red” patients have a QTc > 500ms at baseline and should have ECG monitoring at baseline, 2 hours, 48 hours and 96 hours if therapy is deemed critical. Clearly, at present the evidence for hydroxychloroquine and azithromycin is weak, and hence administration of only one agent at a time if necessary, with potential telemetry monitoring, may be advisable.

An alternative approach to risk stratification could be to document the “Risk Score for Drug-Associated QTc Prolongation”18. 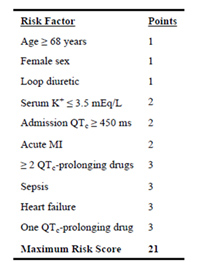 This score could potentially be used in a similar way to the “green” “orange” and “red” scoring system above, with high risk patients requiring closer monitoring and a stronger indication for hydroxychloroquine and/or azithromycin treatment than those in lower-risk groups.

There is a desperate clinical need for therapeutic options in this current COVID-19 crisis and this is reflected with the FDA granting Emergency Use Authorisation for hydroxychloroquine and chloroquine to treat COVID-19. In contrast the European Medicines Agency have said that COVID-19 patients can receive the drugs as part of clinical trials or through national emergency use programs. Ultimately the onus is on the physician to make a decision on whether the evidence for safety and efficacy outweighs the risks of using these drugs. Indeed, based on the studies presented many clinicians worldwide are widely using these drugs because of the lack of alternative options.