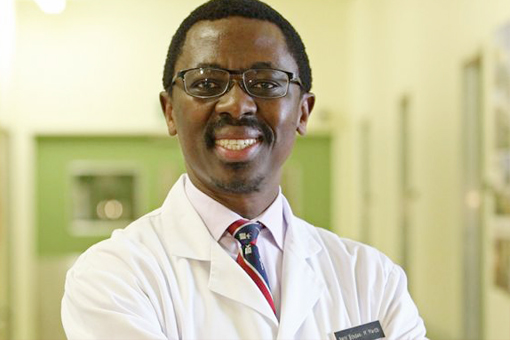 As many of you may be aware Prof Bongani Mayosi died suddenly last Friday at the untimely age of 51. Bongani was a towering figure of African and global medicine and a great friend to British cardiology who will be sadly missed. I encourage you to read the appreciation of his life written by Bernard Keavney and Hugh Watkins, two of his closest colleagues in the UK,

With the untimely death at 51 of Bongani Mayosi, the world has lost the leading cardiovascular clinician-scientist of his generation on the African continent. Professor Mayosi, who most recently served as Dean of Medicine at the University of Cape Town (UCT), South Africa, was a cardiovascular scientist, clinical cardiologist, teacher, leader and advocate of global reach. His research portfolio effortlessly spanned two principal and highly disparate areas - cardiovascular genetics and neglected cardiac diseases of poverty. In both these areas, he produced world-leading science.

In cardiovascular genetics, Prof Mayosi’s discoveries included genes causing dilated cardiomyopathy, arrhythmogenic cardiomyopathy, coronary artery disease, and hypertension; he established an internationally renowned laboratory at UCT which at the time of his death was leading unique studies of the genetics of rheumatic heart disease and congenital heart disease in Africa. Among his contributions to knowledge in single-gene disorders, his discovery in 2017 of a new gene for arrhythmogenic cardiomyopathy was recognised in his own country as one of the most important medical advances made by a South African scientific team since the first human heart transplant. Complex-disease genetic studies generally have a longer lead time to patient benefit – and a principal driver of Prof Mayosi’s career was the desire to make an impact on the cardiovascular health of the world’s poorest people. Accordingly, an equally important part of his research portfolio dealt with the epidemiology and clinical management of such scourges as rheumatic heart disease, tuberculous pericarditis, and hypertension, in Africa. Among many examples of outstanding contributions in these diseases, his 2014 IMPI trial of prednisolone in tuberculous pericarditis, published in the New England Journal of Medicine, challenged received wisdom and instigated an evidence base in the condition; in 2017 he led a Cochrane review of this topic. Prof Mayosi played a major role in many international consortia and initiatives to bring attention and research funding to cardiovascular disease in Africa, and was among the first to recognise the increasingly important role that non-communicable cardiovascular disease is set to play in the 21st century among the “bottom billion” people.

Bongani Mayosi qualified in medicine from what is now the Nelson Mandela School of Medicine at the University of KwaZulu-Natal, where he met his wife, Nonhlanhla Khumalo, now a dermatology professor at UCT. Following junior clinical training, he won a prestigious Nuffield Medical Fellowship to study for a DPhil in the Department of Cardiovascular Medicine in Oxford under the mentorship of one of us (HW). His first project in cardiomyopathy proved not to be tractable at the time (though he did finally crack it, leading to his 2017 discovery). His determination, energy, and astonishing intellectual quickness became clear when he changed direction to work on a complex-disease genetic study which BK had initiated in Oxford during the preceding three years. Bongani Mayosi’s work during his DPhil laid the foundation for over 25 publications and provided data on the heritability of echocardiographic and electrocardiographic measurements that are still relevant and cited today.

He returned to Cape Town in 2001 to pursue his career as a clinical academic cardiologist at UCT and the historic Groote Schuur hospital. In 2006, aged only 38, he was the first Black person to be appointed professor and head of the Department of Medicine at UCT. In 2009 he was awarded South Africa’s highest honour, the Order of Mapungubwe, for services to medicine. Likewise, international honours were showered upon him – for example in 2006 he was appointed international Fellow of the Royal College of Physicians, in 2010 he became an International Scholar of the Population Health Research Institute at McMaster University, and in 2017 he was elected to the US National Academy of Medicine.

As one of the truly internationally outstanding researchers of his generation in South Africa, it was perhaps inevitable that he would be asked to take on higher administrative office, and in 2016 he was appointed Dean of the Faculty of Health Sciences at UCT.  He coupled his heavy administrative load with an undiminished energy and enthusiasm for science, successfully leading projects that others might have thought undeliverable, such as the landmark Rheumatic Heart Disease Genetics (RHDGen) network programme which recruited, phenotyped, and genotyped cases and controls from five African countries; it is a cruel irony that he died just as the results of that pioneering work come to fruition. Prof Mayosi’s scientific courage was a defining characteristic of his approach, and he had the necessary blend of intellectual brilliance, organisational skill, tenacity, and relationship-building capacity, to deliver the most difficult and demanding projects. He became Dean at a difficult time for
South African Universities including UCT, with the early days of his Deanship seeing him challenged by student unrest regarding tuition fees and calls to ‘decolonise’ the curriculum, including a two-week occupation of his office in 2016. As an unfailing supporter of the disadvantaged, but at the same time a holder of high administrative office with unshakeable belief in the value of rigorous science and education, the conflicting pressures on him must have been extreme.

Bongani Mayosi’s achievements as an inspirational teacher and mentor will be among his most lasting legacy. Many of his trainees are now recognised as emerging African medical and research leaders in their own right. In the days following his death, tributes from senior South African public figures have emphasised the extent to which he was a role model for young Black South Africans entering medicine, including a description of him as “a hero of a democratic South Africa”.

On behalf of the British Cardiovascular Society, and with our deep respect, “hamba kakuhle” (Go well), Bongani.