Sacubitril/Valsartan: Where are we now?

In the last century significant progress has been made in recognising the neurohormonal systems responsible for the development and progression of heart failure (HF).(1-3) These include the sympathetic nervous system (SNS) and the reninangiotensin-aldosterone system (RAAS). The use of beta-adrenergic blockers targeting the SNS and angiotensinconverting enzyme (ACE) inhibitors, angiotensin receptor blockers (ARBs) and mineralocorticoid receptor antagonists (MRAs) targeting the RAAS have become the cornerstone of medical therapy for HF with reduced ejection fraction (HFrEF).(3-4)

Even with excellent current medical treatment as well as interventions such as cardiac resynchronization therapy or more advanced treatments in a minority such as heart transplantation, HFrEF is associated with significant morbidity, mortality, and healthcare expenditure.(5)

In this article we consider the most recent evidence in relation to Sacubitril/Valsartan (Entresto).

The introduction of ARNIs

The drive to improve outcomes for patients with HFREF led to the discovery of a new class of drug; angiotensin receptor-neprilysin inhibitor (ARNI). It consists of the ARB valsartan and the neprilysin inhibitor, sacubitril in a 1:1 ratio and is also known as LCZ696 or sacubitril/valsartan.

In summary, the benefits of sacubitril/valsartan in HF patients are felt to be due to the increased levels of peptides that are degraded by neprilysin and the simultaneous inhibition of the effects of AT1 receptor by valsartan (Fig 1).(6-7) 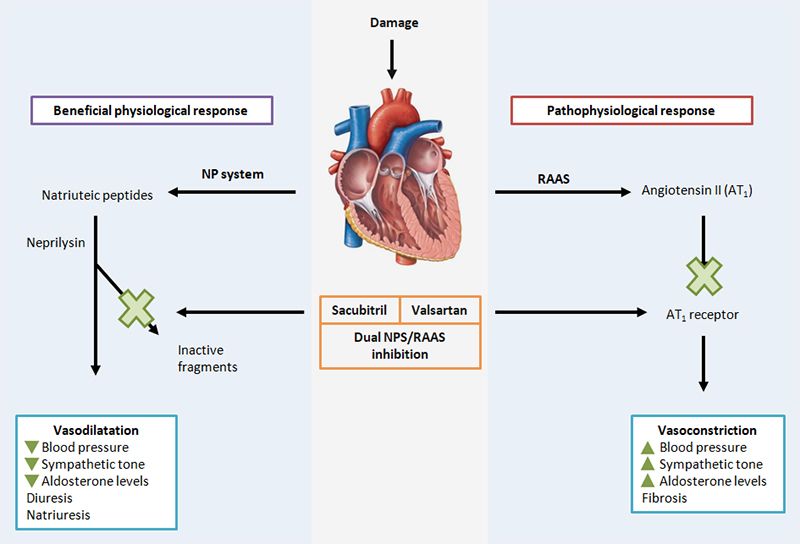 Heart failure activates the SNS and the RAAS which leads to increased sympathetic tone and vasoconstriction, thereby increasing the afterload on the failing heart. RAAS activation leads to increased secretion of aldosterone and ADH causing fluid retention, oedema, and fibrotic changes in the failing myocardium. Together, the SNS and the RAAS result in pathophysiologic and clinical worsening of HF. ACEI, ARB, MRA, and BB reduce the effects of the RAAS and the SNS. The failing heart also activates the natriuretic peptide system (NPS) which promotes sodium and water excretion, vasodilatation, deceased aldosterone secretion, and inhibits fibrotic changes in the failing myocardium. The effects of the NPS are antagonistic to those of the SNS and the RAAS. Sacubitril/valsartan acts by augmenting the NPS and inhibiting the RAAS, thereby, improving the symptoms and inhibiting the progression of HF (adapted figures and caption from references 8 and 9)

Use in Chronic Heart Failure

The main evidence surrounding the efficacy of sacubitril/valsartan came from the PARADIGM-HF trial (Prospective comparison of ARNI with ACE inhibitor to determine impact on global mortality and morbidity in heart failure) which was published in 2014.(10-11)

This was the largest phase III HF study to date and included 8442 patients in a randomised double blinded fashion. Patients included had New York Heart Association (NYHA) class II–IV HF, ejection fraction ⩽35% and elevated BNP levels. Patients were randomly assigned to sacubitril/valsartan or 10 mg of enalapril in addition to standard medical therapy for HF. Eligible patients had to be on a stable dose of an ACE inhibitor or an ARB that was the therapeutic equivalent of 10 mg of enalapril daily for at least 4 weeks prior to entry into the trial.(10-11)

The trial was terminated early after a median follow up of 27 months on the recommendation of the data monitoring committee due to overwhelming benefit. The results showed that sacubitril/valsartan reduced the occurrence of the primary end point (cardiovascular death or hospitalisation associated with heart failure) by 20% with a 16% reduction in all-cause mortality. Both first hospitalisation for heart failure and total hospitalisations were reduced by 21% and 23% respectively.(10-11)

Numerous post-hoc analyses have demonstrated the superiority of sacubitril/valsartan over enalapril and answered the majority of the remaining questions regarding its safety. The overwhelming success of the PARADIGM-HF trial and sacubitril/valsartan has now opened up avenues for a large number of other trials.

Use in Acute Heart Failure

Recently, following the success of sacubitril/valsartan in chronic heart failure, the PIONEER-HF trial evaluating the role of sacubitril/valsartan in patients with acute heart failure reported its results.(12) The multicenter, randomised, double-blind trial included 881 HFrEF patients and elevated NT-proBNP concentrations and a primary diagnosis of acute decompensated HF. The study's inclusion criteria required all patients to be stabilised before randomisation, with stabilisation defined as a maintained systolic blood pressure of at least 100 mmHg, no increase in the use of intravenous diuretics and no use of intravenous inotropes during the preceding 24 hours.(12)

Of the 881 patients who underwent randomisation, 440 were assigned to receive sacubitril/valsartan and 441 to receive enalapril. The results were overwhelmingly favouring sacubitril/valsartan with a 29% reduction in the primary endpoint defined as the proportional change in NT-proBNP from baseline to the mean of concentrations at weeks 4 and 8, among patients treated with Entresto compared with enalapril. In the analysis of secondary endpoints, there was a 46% reduction in death, HF rehospitalisation, need for a left ventricular assist device, or transplant, although this a benefit was driven by reductions in HF hospitalisations.(12)

The rates of worsening renal function, hyperkalaemia, symptomatic hypotension, and angioedema did not differ significantly between the two groups.

The results from PIONEER HF are likely to be supported by the TRANSITION trial which is not yet published but the initial results presented at the European Society of Cardiology (ESC) Congress 2018 are very encouraging.(13) TRANSITION showed that sacubitril/valsartan can be initiated early and safely in HFrEF patients who have been stabilised after hospitalisation due to an acute heart failure episode.

The success of these trials shows that sacubitril/valsartan can also be used in acute situations. The strong feeling amongst all physicians is that there is no better time to initiate medical therapy for patients than when they are in hospital. It is during a patient's inpatient stay that they are most willing to learn about therapies and are receptive to changes to their medical care. There is often hesitancy to initiate a new treatment after hospitalisation as there is a concept that patients are considered vulnerable and unable to tolerate changes in their medication however these trials show that this is not the case.

Use in Normal LV function

PARAMOUNT-HF was a randomised, multinational, double-blind trial which tested the safety and efficacy of sacubitril/valsartan in 301 HFpEF patients. The primary endpoint was change in NT-proBNP from baseline to 12 weeks. The trial showed a significant reduction in NT-proBNP (23% reduction) at 12 weeks and significant improvement in left atrial size and NYHA class in patients randomised to sacubitril/valsartan compared to valsartan alone at 36 weeks.(14)

Similarly the PARAGON-HF trial is a randomised, double-blind trial currently in progress and expected to finish in 2019. It is comparing the long-term efficacy and safety of valsartan versus sacubitril/valsartan in patients with chronic HFpEF. The primary composite outcome is cardiovascular death and HF hospitalisations. Together with the PARAMOUNT-HF trial, the use of sacubitril/valsartan may well be extended into HFpEF.(15)

Use in other cardiovascular conditions

Though the data regarding hypertension and MI is still in its infancy, as the breadth of data grows there is increasing probability that that there will a greater use for sacubitril/valsartan in the near future.

Current NICE/ESC guidelines and use in the UK

NICE guidelines for HFrEF recommend the use of an ACE inhibitor (or ARB), beta blocker and diuretic as first line treatments.(21) Sacubitril/valsartan is recommended as an option for treating symptomatic chronic heart failure with reduced ejection fraction, only in people:

The recommended starting dose of sacubitril/valsartan is 49/51mg twice daily initially which is then doubled to the target maintenance dose of 97/103mg after 2-4 weeks depending on how the patient tolerates the medication. In addition current NICE guidelines mention that treatment with sacubitril/valsartan should be started by a heart failure specialist with access to a multidisciplinary heart failure team. Dose titrations and monitoring should be performed by an appropriate team member.(21-22)

The current guidelines are sensible however there are areas in the UK which do not have access to a multidisciplinary heart failure team which includes community based heart failure specialist nurses. The question therefore is whether the use of sacubitril/valsartan is being limited due to this.(21-22)

Sacubitril/valsartan has revolutionised drug treatment for heart failure. While the major focus of research for its use will be in HF, sacubitril/valsartan has shown promise in the treatment of other important cardiovascular conditions such as hypertension and acute MI. Further research in the near future may open up new avenues and provide us with even better treatment for a range of cardiovascular conditions.